In the East, men like Samuel Adams and John Hancock kept the colonists in a constant state of anger over British rule. Groups of colonists got ready to fight.

The colonists stored gunpowder and other supplies in Concord, a village northwest of Boston. British soldiers quietly marched out of Boston on April 18, 1775. At the same time, riders Paul Revere and William Dawes took separate routes to tell people in the countryside the British were coming. When the British got to Lexington on April 19, the minutemen were waiting. As the two groups faced off, a shot rang out. The American Revolution had begun!

After the Whitman Massacre, people of Oregon were demanding action. They were neither a state, nor a colony, nor a territory. In the spring of 1848, 10 citizens asked the U.S. Congress to make Oregon a territory. By August, President James Polk had signed the Organic Act, which created the Oregon Territory. Becoming a territory was a big deal. It meant the opening of postal routes. It meant Oregon would have an official government. The government would be made up of a governor, three judges, a lawyer, and a marshal, or law officer. In addition, citizens 21 years and older could vote to elect a legislature. (A legislature is the lawmaking branch of a government.) They could also elect someone to speak on their behalf before Congress. ▶ 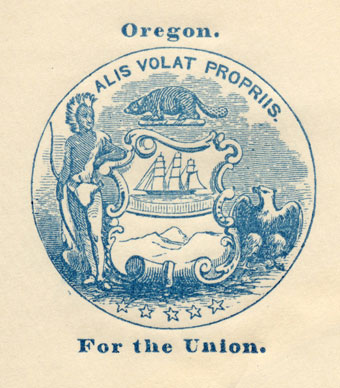 ▲ About a year after Oregon became a territory, an “exclusion law” was passed. This law said “it shall not be lawful for any negro or mulatto to enter into, or reside [live]” in Oregon. (Mulatto is an offensive word for someone who has one African American parent and one white parent.) The law made an exception for anyone living in Oregon at the time. The law was canceled in 1850. But not before at least one person, Jacob Vanderpool, was removed. 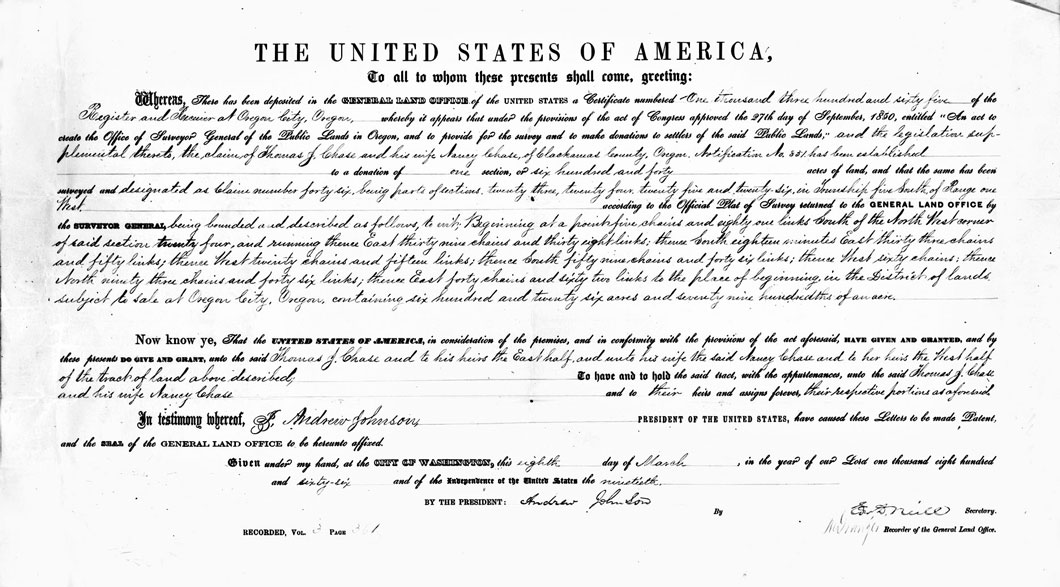 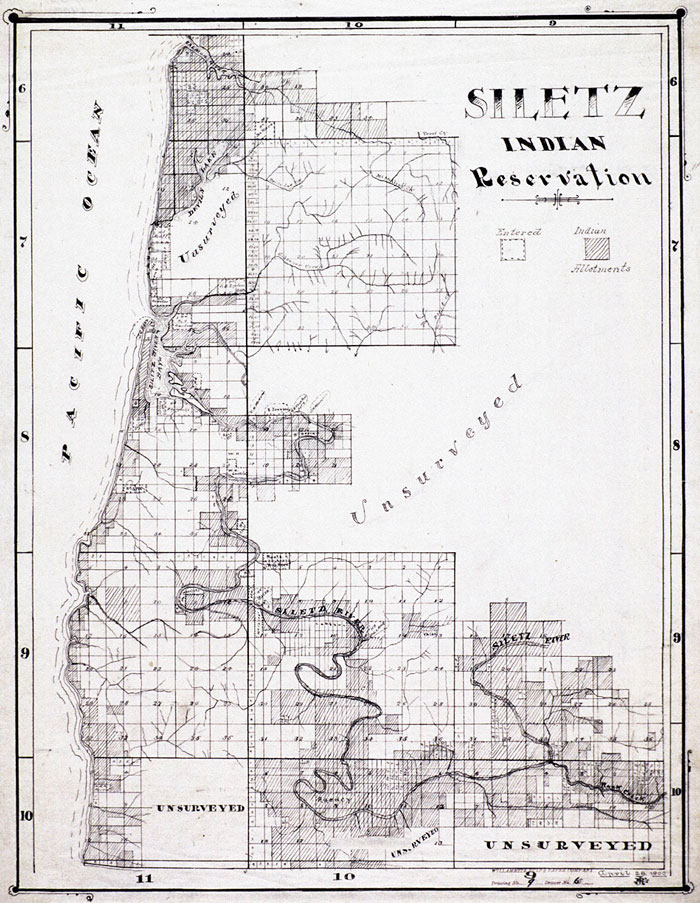 ▲ In the mid-1800s, more and more settlers arrived, putting a strain on the environment. Native Americans fought to keep their land and their way of life. There were raids and wars. But by 1880, many Native American tribes had given their land to the U.S government. In exchange, they moved to reservations on land that the government had set aside for them. The Coast Tribes Treaty of 1855 is an example. The treaty set up the million-acre Coast, or Siletz, Reservation, west of the Cascade Mountains. Even though the land exchange took place, the treaty was never ratified, or made official. Not all tribes agreed to give up their land. They were often forcibly removed by the U.S. army and made to march hundreds of miles to a reservation, with many dying along the way. Typically, reservation land was land that nobody else wanted because it was unsuitable for farming.

The Oregon Donation Land Claim Act gave away land to white people only. The Coast Tribes Treaty removed Native Americans from their land to reservations. Reflect on the effect of these laws. Why could the words “steal” and “cheat” be used to describe the actions of whites? 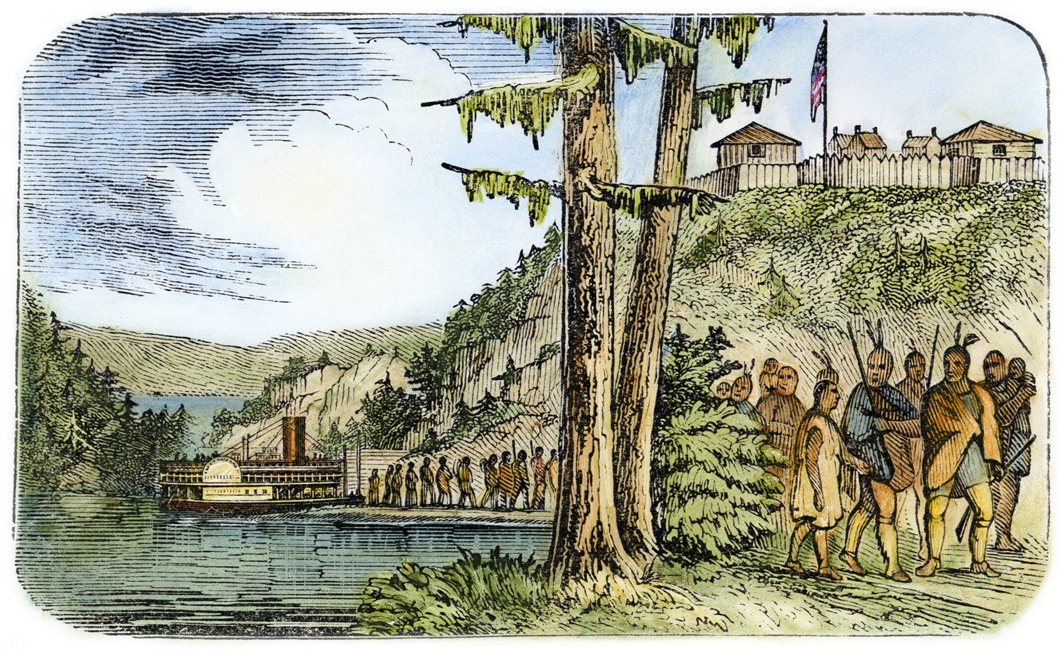 ▲ The years between 1834 and 1871 have been called the Removal Period. It was a damaging time for Native Americans everywhere. The Indian Removal Act was signed into law in 1830. It had the effect of making Native Americans east of the Mississippi River move west. The removal was supposed to be voluntary. But it became required whenever the U.S. government thought it was important. Thousands of people in the southeastern United States were forced to move. In 1838, that included members of the Cherokee Nation. An estimated 8,000 Cherokee died during or soon after the forced march. No wonder it was called the “Trail of Tears.” In the years that followed, Native Americans of the West, including in Oregon, were affected. 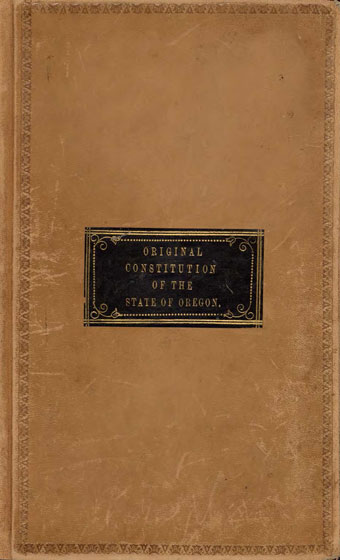 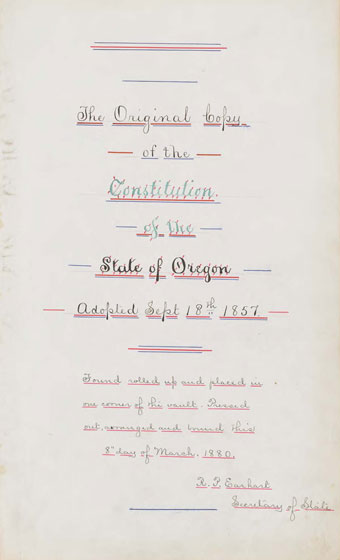 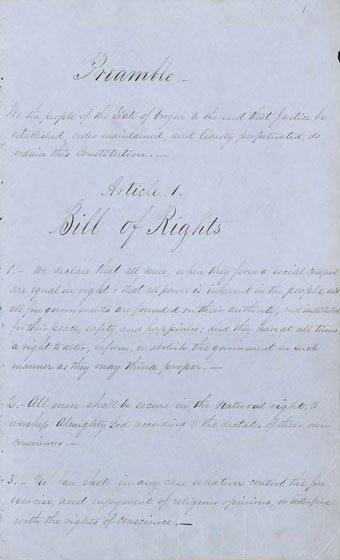 Statehood for Oregon was not a sure thing. Many Southerners were against it because the state had voted against slavery. Many Northerners didn’t like the way Oregon treated African Americans and other minorities. The question of Oregon statehood wasn’t decided for months. Finally, in  February of 1859, Congress voted yes. President James Buchanan signed the bill and it was done. Oregon became the 33rd state. ▶ 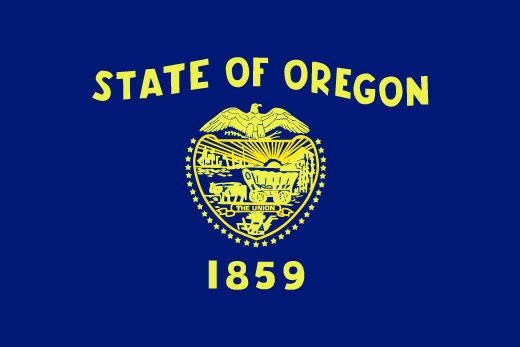 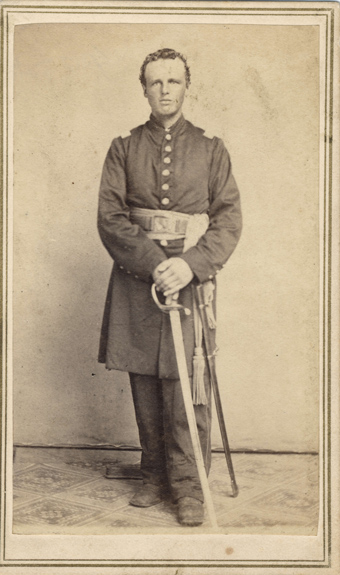 ◀ It was 1861. The Civil War had begun. Oregon was far from the center of it. Even so, its soldiers were ordered east to join the war and fight for the Union. In Oregon, the soldiers were replaced by a volunteer corps. The volunteers were known as the First Oregon Volunteer Cavalry (1st OVC) and the First Oregon Volunteer Infantry (1st OVI). (A cavalry is soldiers on horseback. An infantry is soldiers on foot.) The volunteer soldiers patrolled the Oregon Trail. They also protected freight trains and miners who had come to find gold in the Blue Mountains. The OVC and OVI were closed down after the war. 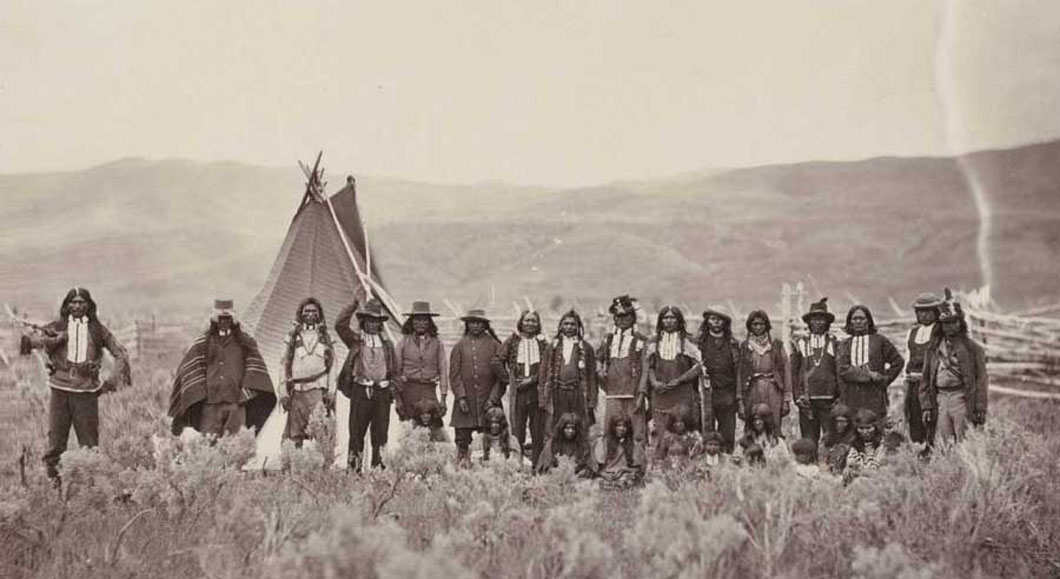 Maj. Perry, with one hundred and eleven men left Camp Harney for a scout on the Malheur River, and on April 5th the Indians were found camped on the top of a mountain. The troops were stationed so as to surround them, and one detachment [group] was within thirty yards of them. In a few minutes the Indians made the discovery, and made a dash to escape. There were thirty killed, two taken prisoners and three escaped, two of whom were thought to be seriously wounded. The command then returned from the field. 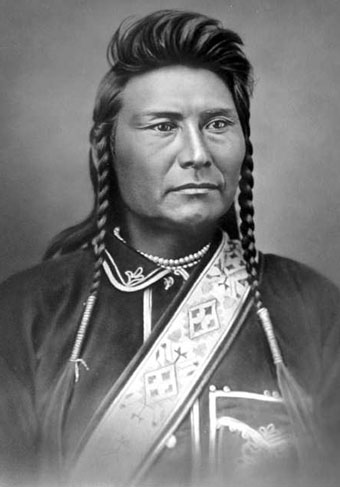 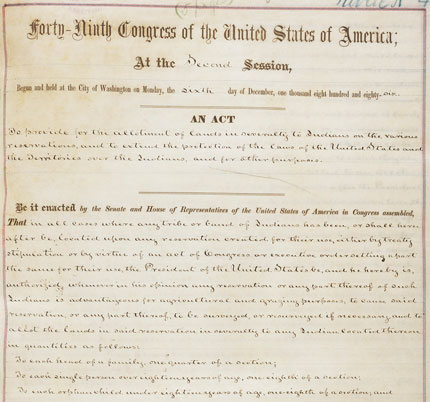 The Dawes Act broke up large areas of land into individual pieces. Reflect on why Congress might have passed this law. What effects would it have had? 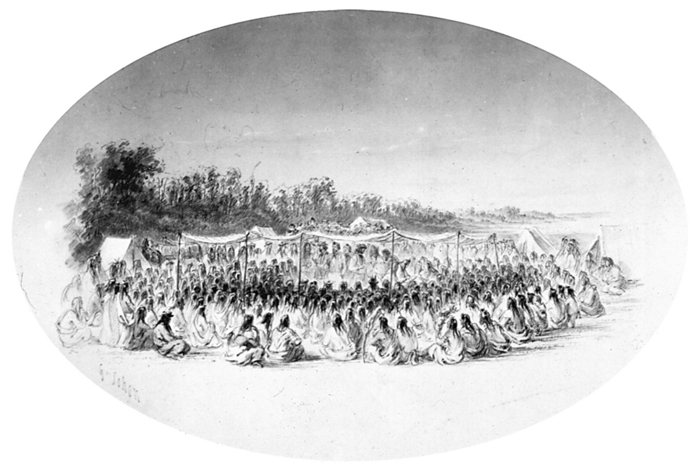 ▲ In 1855, through a treaty with the U.S. government, the Walla Walla, Cayuse, and Umatilla of northeastern and central Oregon agreed to exchange 6.4 million acres of their land for 510,000 acres in northwestern Oregon. And even then, the government examiners cheated. They only measured off 240,000 acres for the Native Americans. This was a huge loss for the Walla Walla, Cayuse, and Umatilla. But it was only one of many. Consider the Oregon Donation Land Claim Act and the Coast Tribes Treaty, as well as the Walla Walla, Cayuse, and Umatilla Treaty. All these acts had something in common. They represented a conscious effort by the U.S. government to take control of Native American lands. Whites did not take into account the people’s culture. They did not take into account the fact that the people had been occupying the land for generations. It was nothing other than a land grab. And one that ate away at the roots in Native American culture. 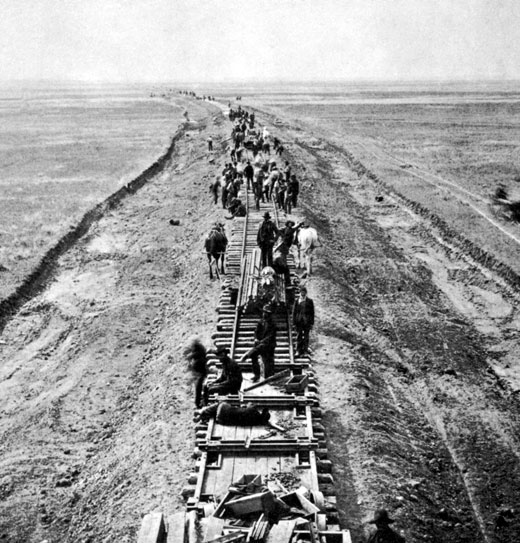 ◀ More and more settlers were moving to Oregon. The roads that carried them were rough. Dusty in the summer. Muddy in the winter. More and better transportation was a must. The answer came in the form of cars on tracks – the railroad. In 1868, construction began on the Oregon Central Railroad. Four years later, a rail route from Portland south to Roseburg, Oregon, was complete. And by 1887, Oregon had a rail connection to California and the transcontinental line. (Transcontinental means “from one side of a continent to the other.”) And that was just the beginning. The Northern Pacific, the Southern Pacific, the Union Pacific, and the Great Northern railroads all connected Portland with the rest of the country.

The fishing industry benefited from the railroads, too. Canned salmon could be safely shipped across the country by rail. And it turned out to be quite popular in the East. Plus, new machines like fishwheels made catching the salmon fast and efficient. That meant more fish caught, canned, and sold. An unfortunate result was a huge decline in salmon. ▶ 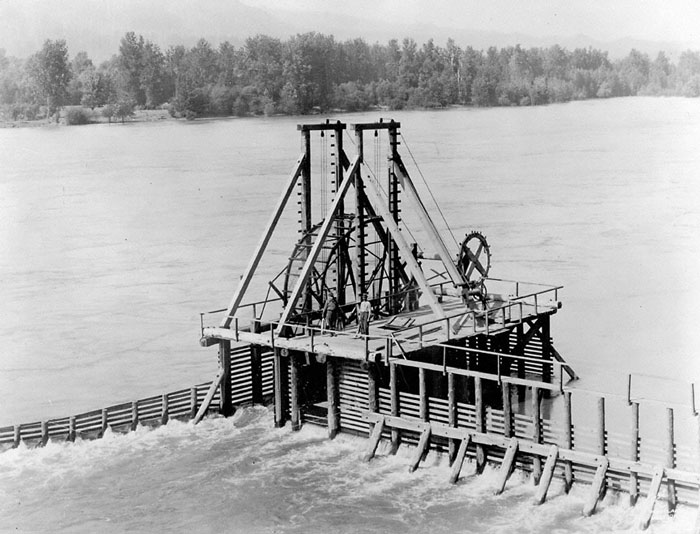