The 20th century began, as the previous one had, with war.

This time it was a war in Europe. World War I people called it because this was an international conflict, the world’s first.

A second such conflict, World War II, took place less than 25 years later. In between, the United States and the world suffered a Great Depression. A depression is a time of tremendous economic decline. People lost their jobs and their savings, banks failed, and businesses closed. The depression lasted until the beginning of U.S. involvement in World War II. When that war ended, suburbs – towns on the borders of large cities – grew. And the country looked inward. Many saw great injustices being done on the basis of race. The struggle to right those wrongs through the civil rights movement grew in strength through the end of the century and beyond. 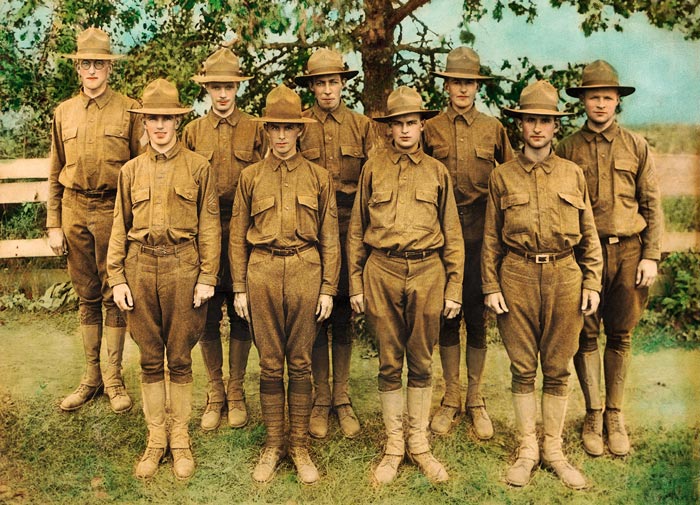 ◀ Oregon went to war right along with the rest of the country. Over 24,000 Oregonians volunteered to serve in World War I (1914–1918). Thousands more were drafted, or required to serve. The University of Oregon Medical School worked with the Red Cross to operate Army Base Hospital Number 46 in France. Doctors and nurses at the hospital treated wounded soldiers. Most were sent home to recover. 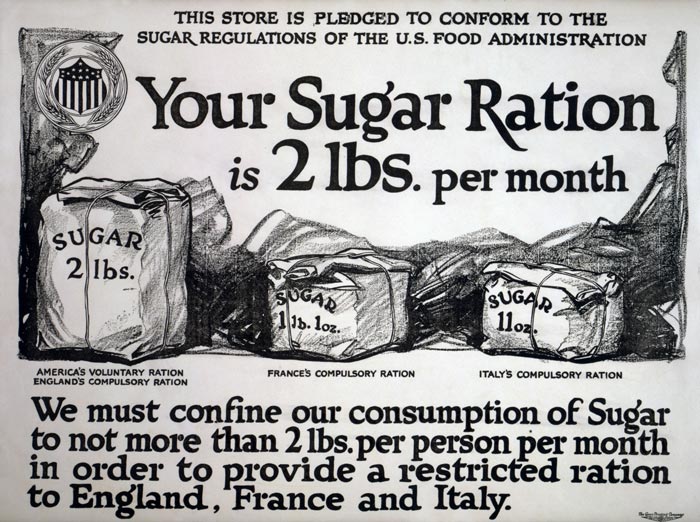 ▲ Oregonians changed their diet to support the war. Wheat, meat, and sugar were needed for the soldiers. So bread was made with grains like corn, rice, and oats. “Victory bread” they called it. Some liked it. Some didn’t. But everyone ate it. People ate fish and chicken instead of meat on “Meatless Mondays.” And they could only buy a small amount of sugar once a month. Women worked on farms and in mills and factories. Many children joined the Junior Red Cross. They gathered foxgloves, a plant used in medicine. They collected moss, which was used to bandage wounds. They made pillows and tables for soldiers. They even made joke books to amuse the soldiers.

▲ The Great Depression (1929–1939) brought years of misery. It seemed like everyone was out of work. President Franklin D. Roosevelt started a program to put people back to work. It was the Civilian Conservation Corps, or CCC. One project was to build the Bonneville Dam on the Columbia River, between Oregon and Washington states. The project created thousands of jobs. The finished dam provided water to irrigate the dry land around it. It was used to produce electricity for factories and homes. And it created hope during dark times. 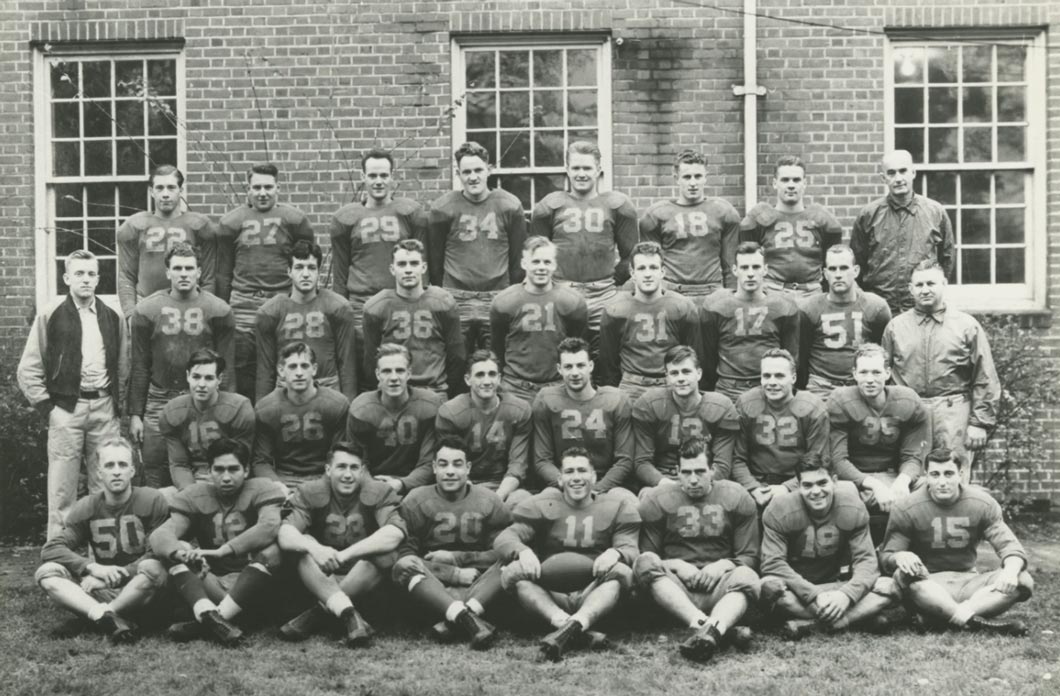 ▲ On December 4, 1941, the Willamette University Bearcats football team arrived in Hawaii to play a few post-season games. On December 7, the Japanese bombed Pearl Harbor, a U.S. naval base there. On December 8, the U.S. declared war on Japan. The Bearcats were stranded. With no way to get home, they joined the army. Their first job was to string barbed wire on Waikiki Beach. This would keep enemy soldiers away, or at least slow them down. Then the Bearcats were assigned to guard water towers and storage tanks on the island. It wasn’t until December 19 that the team left for home.

The United States was at war again. This time it was World War II (1939–1945). The whole country was rallying around the effort. Conservation was the message. Use less was the goal. The slogan was “Use it up. Wear it out. Make it do or do without.” Posters, television, and radio messages about how to conserve were everywhere. Below is part of a speech given to high school students by a member of the Oregon State Defense Council. ▶ 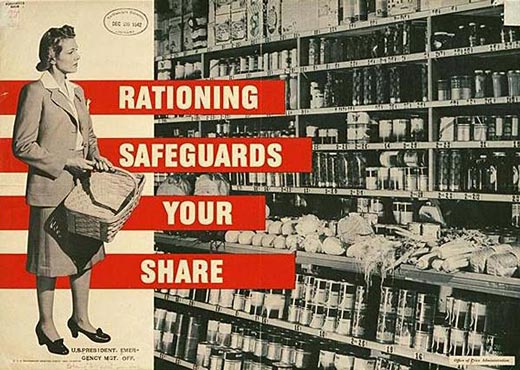 We must now learn to walk and patronize public conveyances; we must ride bicycles – we must do this cheerfully. . . . We must take care of the car we have and use it for necessary driving. We are short on rubber, and though we have plenty of gasoline, it must be used in transportation of war materials and men and in other lines of endeavor [efforts] vital [important] to war service.

The Japanese bombing of Pearl Harbor created alarm throughout the United States, but especially in Oregon. To understand why, consider the state’s location on the West Coast. According to the Oregonian newspaper, people were coming to the “grim realization that the mouth of the Columbia River is the closest mainland point to Japan.” It’s no wonder the military in the region was on high alert.

▲ Even before Pearl Harbor, Oregonians were looking up at the sky. More than 28,000 people volunteered for Oregon’s Aircraft Warning Service. The service had 500 observation posts. What were the volunteers looking for? Enemy planes. This is how the director of the Oregon State Defense Council put it.

Oregon men and women are at their stations on hilltop and in forest, on beach and mountain, scanning the skies for the sight or sound of airplanes in flight. This is Oregon’s first line of defense against enemy bombing. . . . 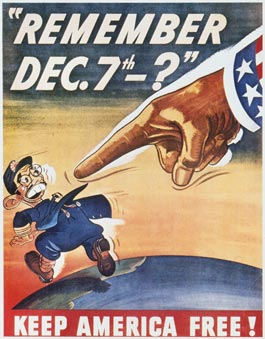 ◀ The war caused many Americans to develop a very negative view of all people of Japanese descent – U.S. citizens or not. In Oregon, these feelings came with consequences. For example, the Union Pacific Railroad fired “certain Japanese.” The Portland City Council ruled that “no license of any kind be granted by the City of Portland to any Japanese national [someone from Japan].” Members of the Hood River Japanese Methodist Church in Salem, Oregon, responded with a public pledge of loyalty. In it, they pledged “our loyalty to the Stars and Stripes just as do our children who are patriotic American citizens. . . ."

In February 1942, about two months after Pearl Harbor, President Roosevelt signed Executive Order 9066. This order led the way to putting Japanese Americans in internment camps. (Internment means “imprisonment.”) Japanese Americans in Oregon went to camps, or detention centers, in Idaho or California. The camps had guard towers and barbed wire around them. They had schools, post offices, and hospitals. Everyone ate together in one large room. The people in the camp grew most of their food on the surrounding land. The last internment camp wasn’t shut down until 1946. ▶ 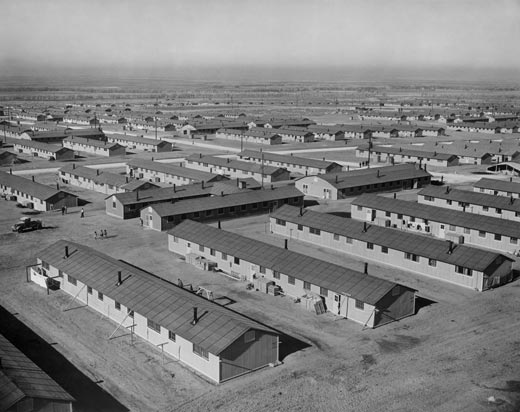 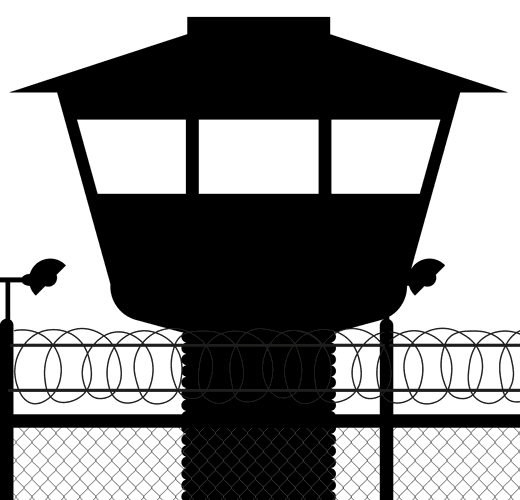 From 8,000 to 18,000 people lived in a detention center. Reflect on the thinking that led the U.S. government to build these centers. Was it reasonable?

◀ After the war, people were on the move. They moved from small towns in the countryside to large
metropolises. From farms to cities. Why? Because fewer farmers were needed. Large farms were able to produce much more than before the war. This was because of machinery. New machines made irrigating the land easier. Bigger machines could plow more land. Complex machines could harvest more land. Between 1950 and 1960, many small towns shrank by about 25 percent.

There was a huge demand for cars after the war. And all those cars needed roads and highways to drive on. Oregon state government responded. Bridges were put up. Highways were built. Roads were improved. Where did many of these bridges and roads and highways lead? To the suburbs, especially the suburbs around Portland. From 1950 to 1960, the population of communities like Beaverton and Oswego jumped by more than 150 percent. ▶ 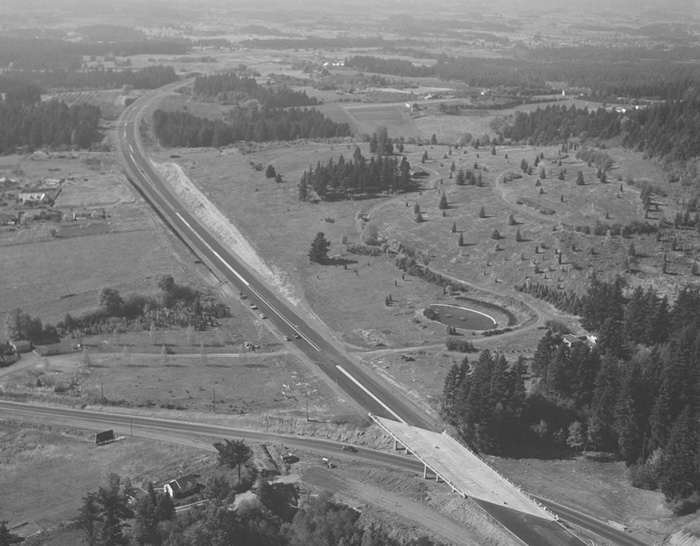 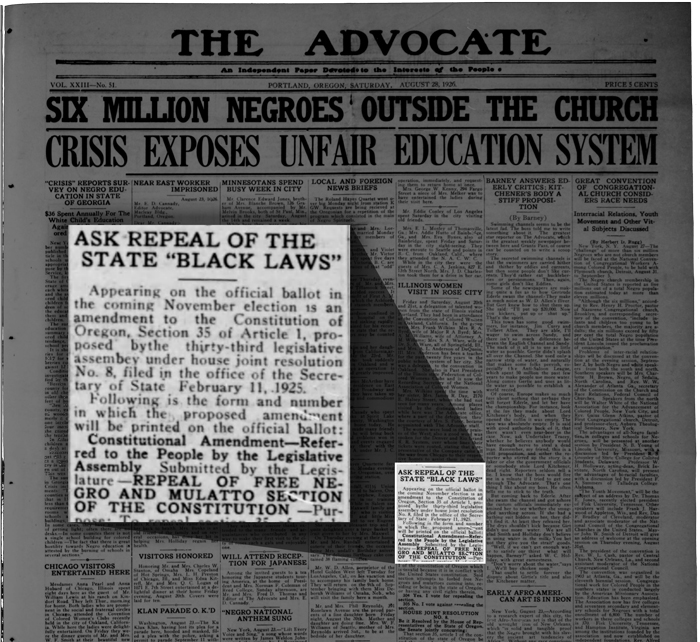 Throughout the 20th century, Oregon worked to address matters of race. During that time, it reversed or changed many laws on racial exclusion. Here are some examples.

The last of the exclusion laws is repealed (cancelled).

Voting restrictions are lifted from African Americans and Chinese Americans.

The Oregon Legislature gets behind the 15th Amendment, 90 years after it was adopted in the United States. (The 15th Amendment guarantees that the right to vote cannot be denied because of race.)

Oregon gets behind the 14th Amendment for a second time. (This amendment states that all African Americans born in the United States are citizens. And it guarantees all citizens “equal protection under the law.”) This is 105 years after Oregon took back its original agreement.

Law that requires removing racist language from the State Constitution is passed.

During World War I, the Civilian Conservation Corps built the Bonneville Dam on the Columbia River, between Oregon and Washington.

During the Great Depression, the Civilian Conservation Corps built the Bonneville Dam on the Columbia River, between Oregon and Washington.