A drummer sprinkles a few grains of tobacco on the drum as an offering.

A hunter thanks a bear for dying so that the hunter and his people may eat. Gatherers of wild fruits leave behind a basket containing a cornmeal dumpling as thanks.

It’s not an exaggeration to say that every aspect of Native American life is connected to spiritual beliefs. Each tribe has its own beliefs, myths, ceremonies, and sacred places. However, there’s a common thread among Native American cultures. They all have a reverence for nature and a respect for all forms of life.

When European explorers and settlers came to America, their values clashed with those of the Native Americans. Native Americans tried to live in harmony with nature. The newcomers wanted to dominate it. With no respect for the views of their Native hosts, whites chased their dream of material progress. Today, many Americans realize the negative effects that unchecked materialism has on our planet. Some are looking to the ancient ways of Native Americans for guidance.

◀ Traditional Native American religions believe that serious illnesses may have supernatural causes. So trained healers with special spiritual powers are needed to treat them. The Inuit believe that many sicknesses are caused by human actions that anger supernatural beings, such as not honoring the spirit of an animal hunted for food. Inuit may also get sick if they have been angry or uncooperative. This belief is similar to the modern psychiatric theory that some physical illnesses are caused by emotions. An Inuit healer may ask a patient to think about past actions to find a wrongful act. The healer might prescribe a change in attitude or behavior as part of the cure. 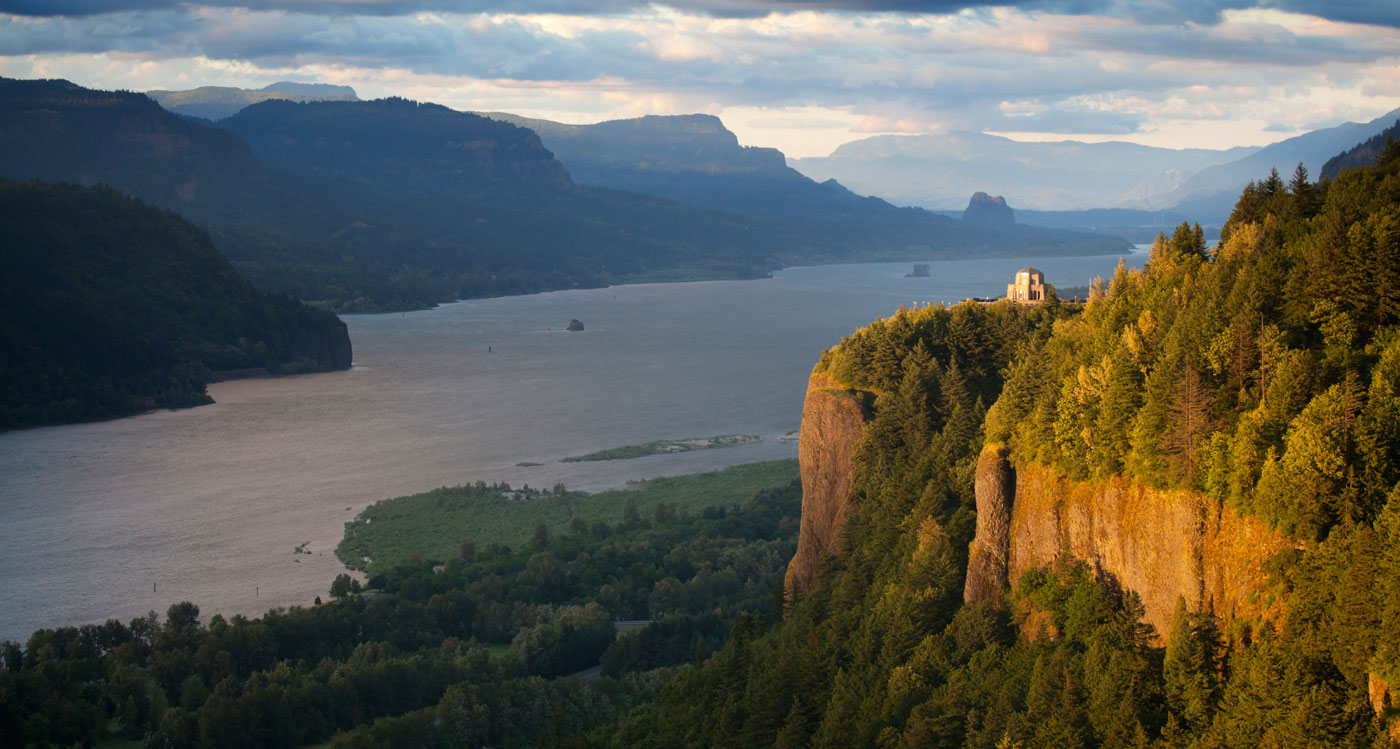 To Native Americans, the whole Earth is sacred. Certain places, however, are more sacred than others. Before their lands were taken from them, various tribes worshipped at lakes, mountaintops, and hot springs that held special meaning for them. Now, many of those places have been desecrated or are in danger of being desecrated because of the demands for material progress.

▲ Native American myths and legends not only explain the creation of the world but also the presence of some of its pleasures, such as delicious strawberries. In a Cherokee legend, the first man and woman got into an argument one day, so the woman left her husband. He went after her, but he could not catch her. The Sun decided to help the man, so it caused raspberries, then blueberries, then blackberries to grow in the woman’s path. None of them tempted her. Finally, the Sun put strawberries in her path and the woman stopped to eat them. When she realized how tasty the berries were, she began to pick some. That allowed her husband to catch up with her and apologize. Even since that time, strawberries have been a reminder to Cherokee people to be kind to one another. 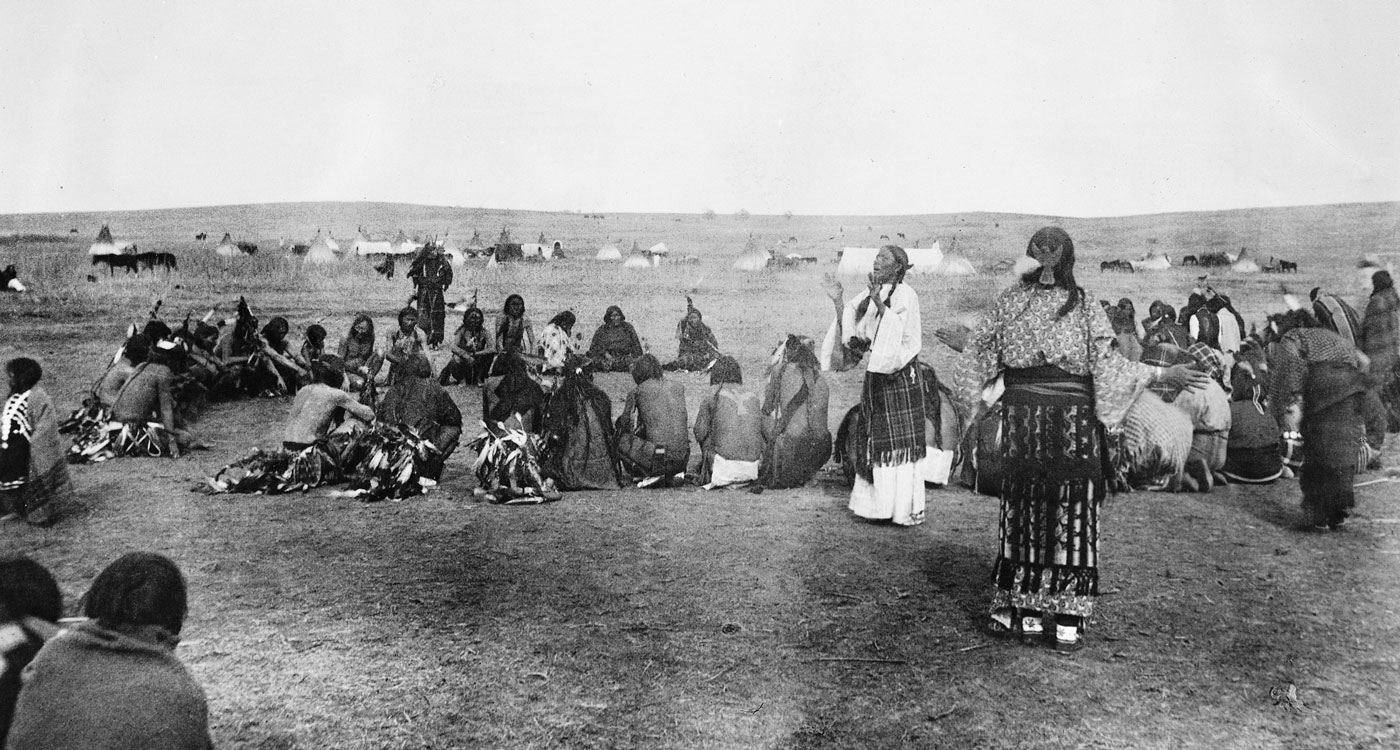 For a long time, the U.S. government tried to wipe out Native religions. During that time, several Native American prophets came forth to lead their people back to traditional ways. One such prophet was Wovoka, a Nevada Paiute, who founded the Ghost Dance religion in 1889. The religion was peaceful, but many whites feared it would inspire Natives to violence. In 1890 at Wounded Knee Creek, on the Lakota Sioux reservation, U.S. soldiers massacred more than 300 people. Soon, other Native Americans abandoned the Ghost Dance religion in fear that they too would be attacked by U.S. troops. This photograph shows Ghost Dancers.

All Native American religions have ceremonies to mark important milestones in a person’s life: birth, naming, coming of age, marriage, death. Kinaaldá is a coming-of-age ceremony for Navajo girls. During the time of the ceremony, the honored girl must run toward the east twice a day—in the morning and in the afternoon. Navajos believe all things begin in the east, where the Sun rises. In the 1950s and 1960s, many Navajo children were taken from their families and sent to boarding schools. They were forbidden to speak their language or practice their culture. So ceremonies like Kinaaldá almost died out. Now that there has been a change in U.S. government policy, some children are taught Navajo language and culture in schools on the reservation, and many of the old ceremonies are being revived. ▶ 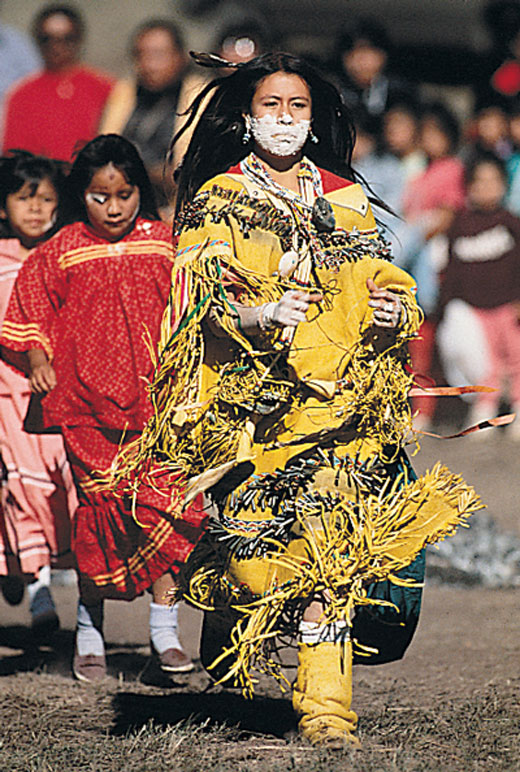 “I like living in this community, and I like being Choctaw, but that’s all there is to it. Just because I don’t want to be a white man doesn’t mean I want to be some kind of mystical Indian either. Just a real human being.”