Along the Atlantic coast, from Canada to the Carolinas, the ocean was rich with fish and shellfish. Many nations who spoke related languages lived in clusters of coastal villages.

Each had its own language, but all the languages had common elements. That’s how people from the Algonquian nations could communicate with one another. Other Algonquian speakers lived inland. They ranged from the Ohio River valley as far as the western Great Lakes. The Algonquians had many things in common. They also had many differences, based on the variety of places they called home. 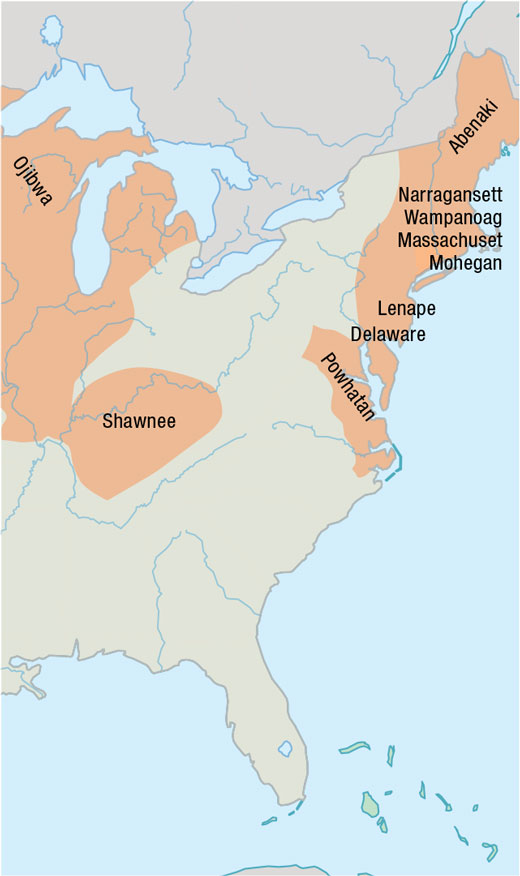 ▲ On the coast and inland, all the Algonquians had access to water and trees. Those who lived farther north got most of their food by hunting and fishing. Those farther south were more likely to farm. Chippewa and Ojibwa legends suggest that they first lived at the mouth of the St. Lawrence River. Over thousands of years, they migrated west to the Great Lakes.

The Algonquians who lived along the central Atlantic coast were ruled by chiefs. Towns were linked into regional networks, each one under the care of a prominent family. The leader of a group of towns was known as a sachem. A sachem could be male or female. The position of sachem was passed down through the mother’s family. ▼ 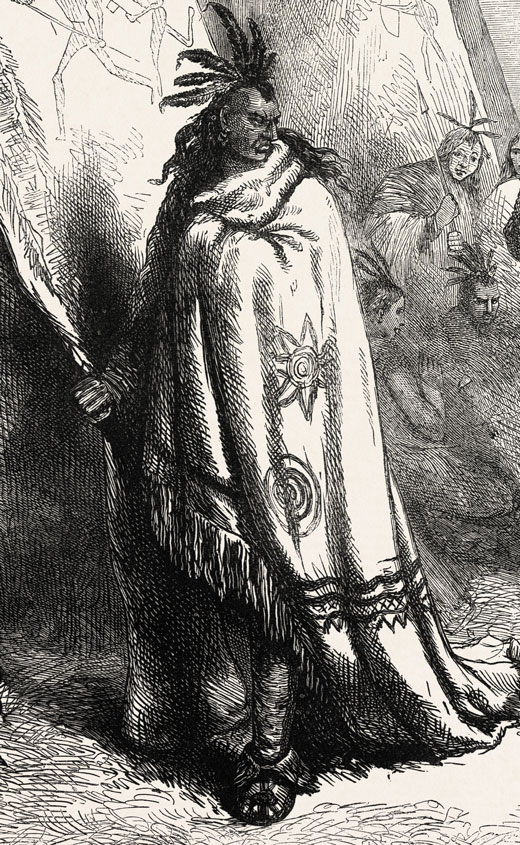 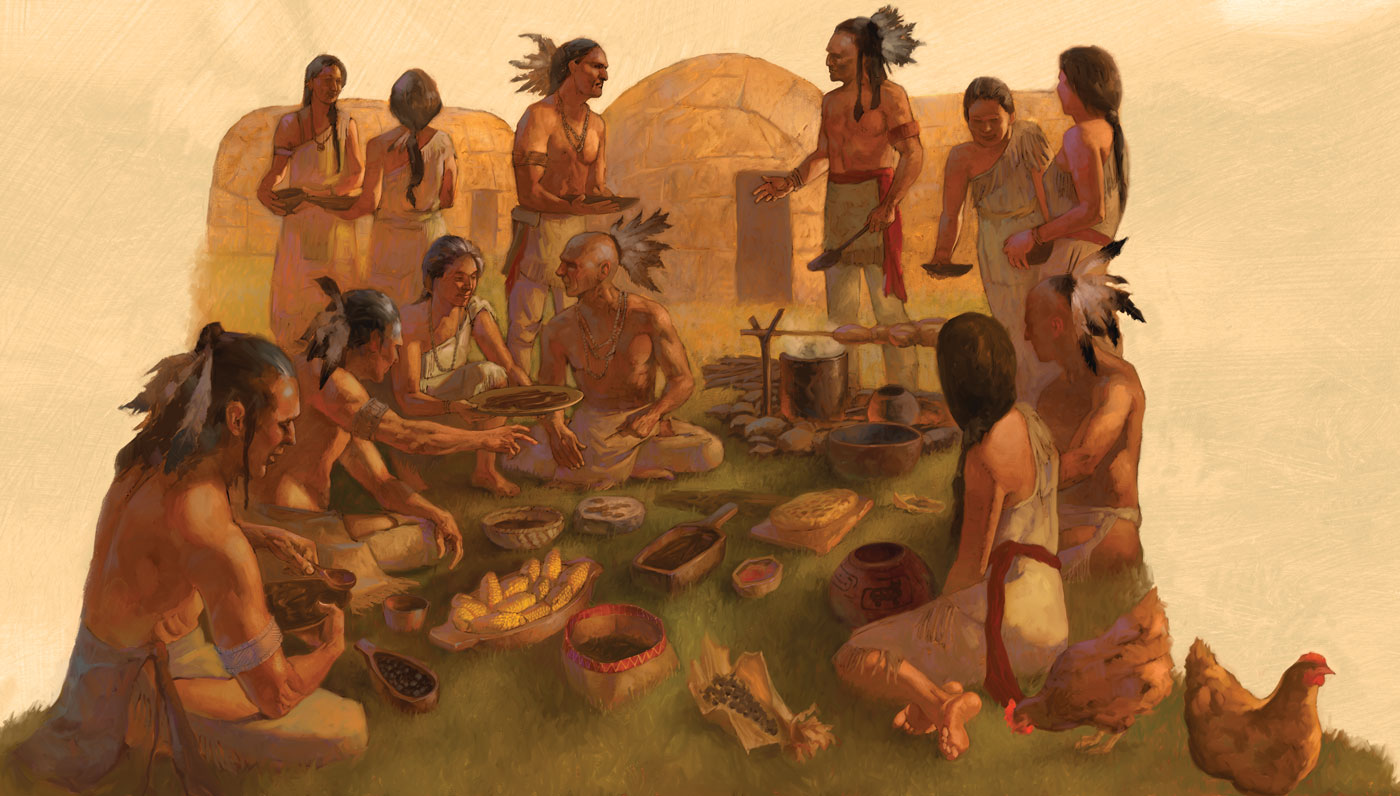 The followers of each sachem gave him or her food and other goods in tribute. Sometimes, the sachem passed the goods on to the needy. It was a way of sharing the wealth and making sure that no one went hungry. Once a year, the sachem used the tribute to host a thanksgiving ceremony.

The Abenaki lived in Maine and coastal Canada. They lived with relatives in small groups, each led by a chief who advised the group and helped make decisions. There was a separate war chief. A council of men and women made war decisions. Smaller councils of chiefs and a member of each family made the other decisions. In the 17th century, the Abenaki joined together in a confederacy with other nearby tribes. They did this mainly to protect themselves from the Iroquois League. ▼ 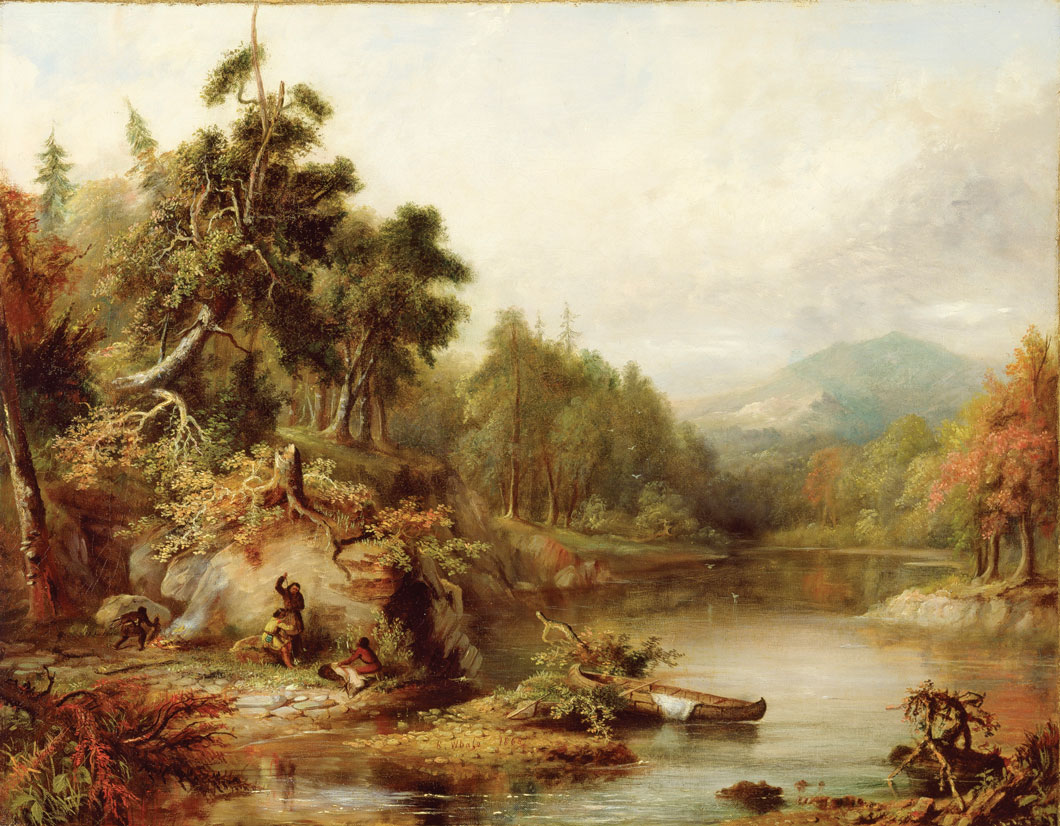 ▲ The Potawatomi were Algonquian-speakers who lived in what is now Michigan. They lived in farming villages in the summer, but in the fall, they split into smaller family groups for the winter hunting season. The Potawatomi were grouped into several bands that were independent of one another. Each band had its own territory. Clan membership was passed from father to son. Each clan had members in all of the bands. This helped to create peaceful relations among the bands. 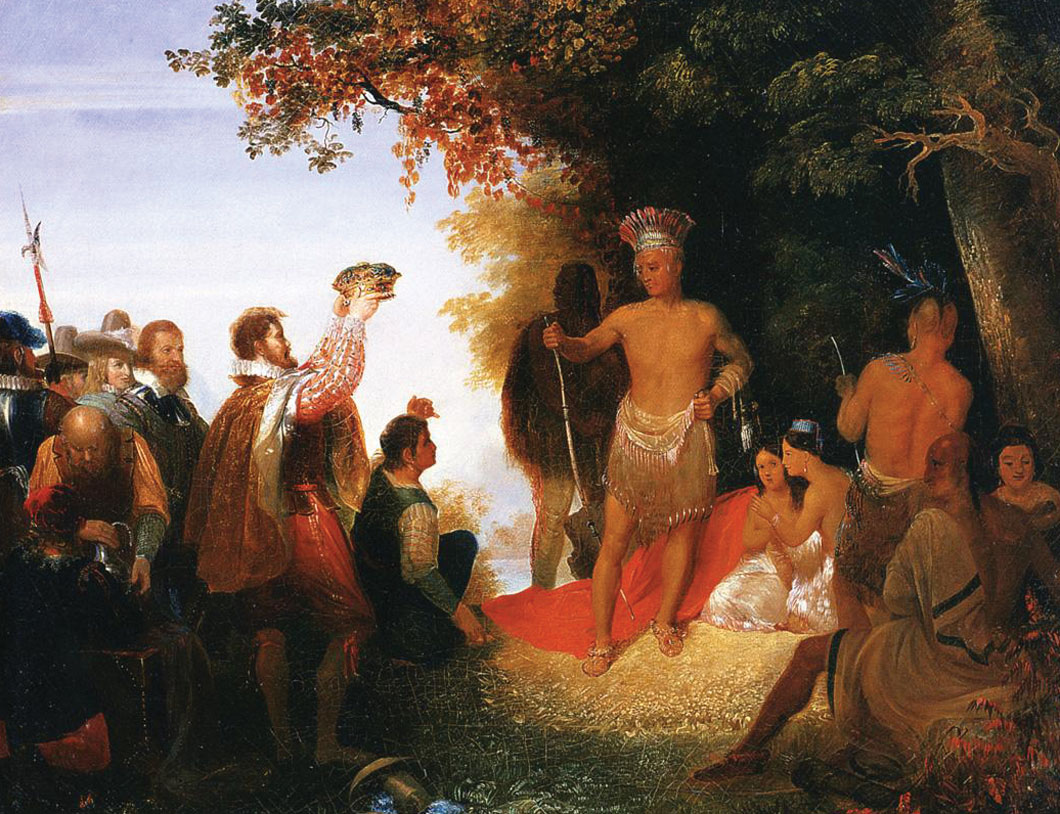 ▲ Powhatan was one of the most powerful Algonquian leaders. Unlike some Algonquian leaders, he inherited his role from his father. When his father died, Powhatan took control over six other chiefs. They were all on the coast of Virginia and the Chesapeake Bay. He convinced 24 more chiefs to join the Powhatan Confederacy. The confederacy was created to defend against common enemies. At his most powerful, Powhatan may have ruled an empire of 13,000 to 34,000 people.

Contrast the Iroquois League with the Powhatan Confederacy. Consider these traits: the main purpose of each one, how leaders were chosen, how decisions were made, and the relative power of women and men. 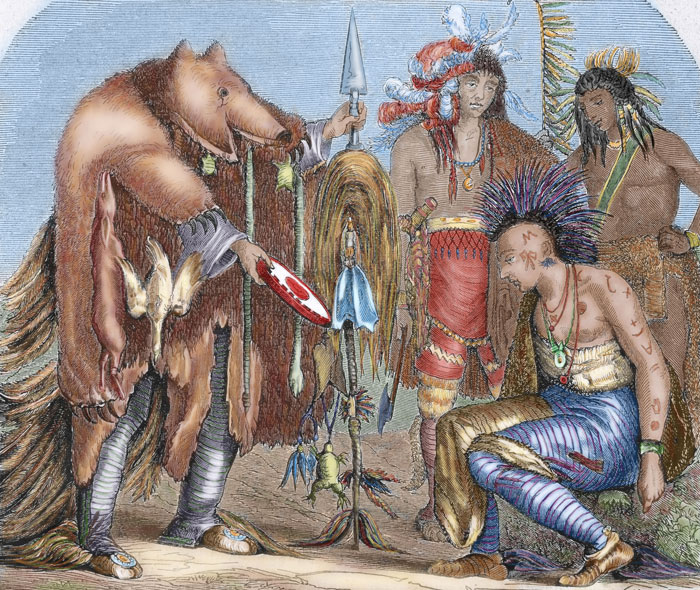 The Algonquians believed in a spirit world. To them, the Great Spirit was present in all things, living and nonliving. Only special people could communicate with the spirit world. Called shamans, they were very respected. One of their powers was forcing evil spirits out of a sick person.

Among some of the northern Algonquians, including the Ojibwa of the Great Lakes region, there was a group called the Midewiwin. It was also known as the Grand Medicine Society. These men and women were skilled in the healing arts. They cured illness by using special plants and by contact with the spirit world.

Life in an Algonquian Village