Highlights on the Road to Music Royalty

Have you heard this expression? “The apple doesn’t fall far from the tree.”

In general, it means that kids are similar to their parents. That they often have the same qualities or talents as Mom and Dad. Suppose a parent is an actor. His or her child may become an actor. Or be involved in some way in the performing arts. Imagine a parent is a doctor. The person’s child may also become a doctor. Or be involved in some other way in health care. The same is true for painters and firefighters and lawyers. And the same was true for Aretha Louise Franklin.

Aretha had music in her blood. She was born in 1942 in Memphis, Tennessee. Her mother, Barbara Siggers Franklin, was a gospel singer and pianist. Her father (right), Reverend Clarence LaVaughn “C.L.” Franklin, was a Baptist minister. He was widely known for his sermons and his singing voice. (Aretha can be seen on the far right in this photograph.) All this music paved the way for Aretha. She had a 60-year career as one of the best female artists of all time. And she sold over 75 million albums worldwide. ▶ 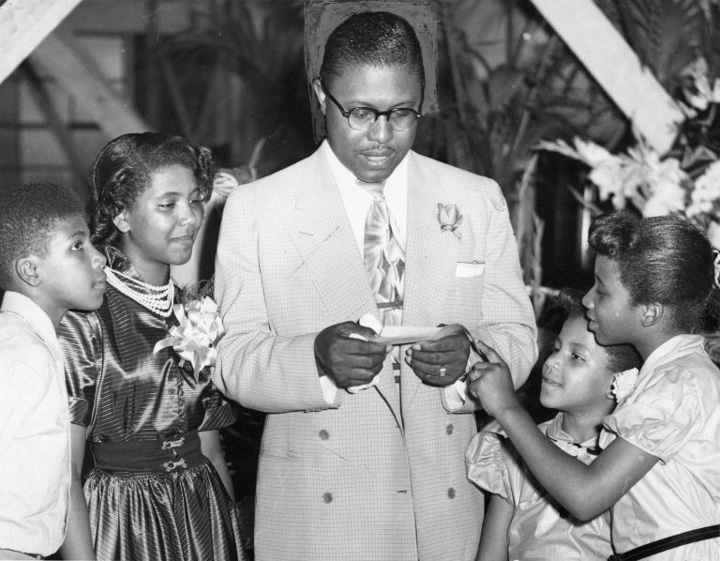 Before there was Black gospel, there was African American spiritual music. This was a kind of religious folk music. It was connected to African people’s enslavement in the American South. “Swing Low, Sweet Chariot” is an example. Soon after emancipation in the mid-19th century, African Americans began writing music. The music had three main influences, or features. One was spiritual music. Another was call-and-response phrasing. (Call-and-response is a two-part singing style. The first part is often sung by one person. The second part answers the first part. It is usually sung by a group.) A third was biblical subjects. This was the first gospel music. Aretha Franklin’s version of “Amazing Grace” is an example of gospel. 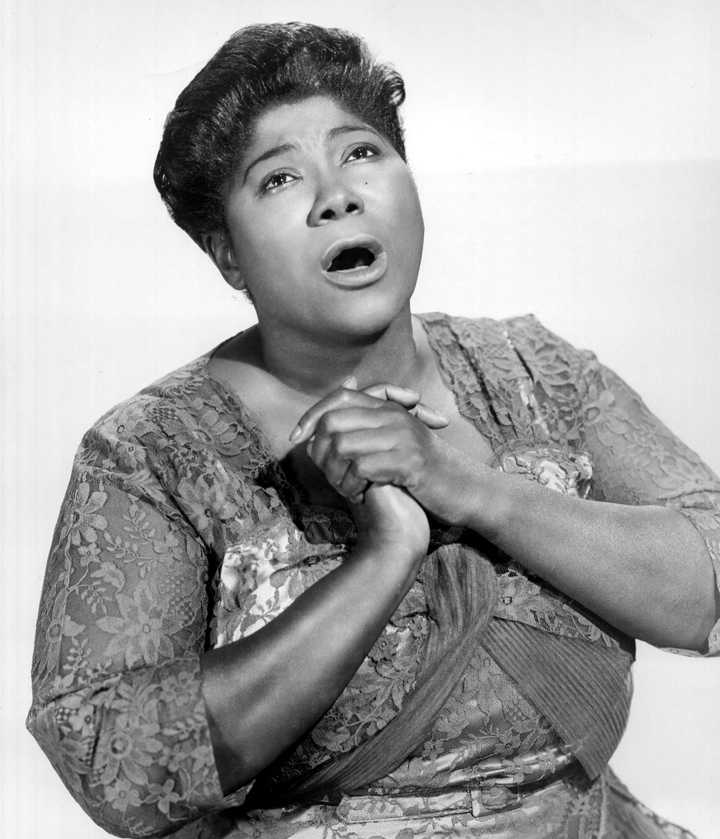 ◀ Gospel music filled Aretha’s childhood. When she was five, the family moved to Detroit. There, her father became pastor at the New Bethel Baptist Church. His reputation as a powerful singer drew other talented artists to his home and into Aretha’s life. They included Mahalia Jackson (shown here) and Sam Cooke. Civil rights leader Martin Luther King Jr. was also a frequent visitor. These two influences – gospel and social justice – would guide Aretha’s music and many of her decisions in the years to come.

Aretha was a self-taught, gifted pianist. She got her start as a performer singing in front of her father’s congregation. She also toured with him to churches in the area. When she was 14, she recorded her first album. It was done at her father’s church. The album is called Songs of Faith. ▶ 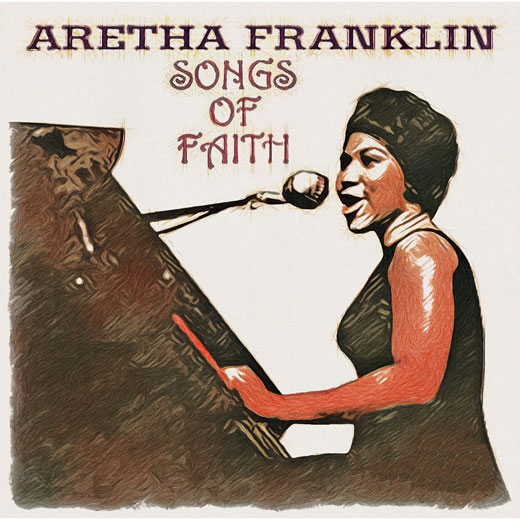 In 1960, when she was 18, Aretha Franklin moved to New York City. There, she signed a recording contract with Columbia Records. At Columbia, she turned away from religious music. But she didn’t focus on any one particular kind of music. People at Columbia wanted her to sing Broadway ballads – songs that tell a story. They also wanted her to sing music that kids of the time were listening to. She did that. But in spite of her talent, she was not as successful as she and others thought she could be. It was time for something different. ▶ 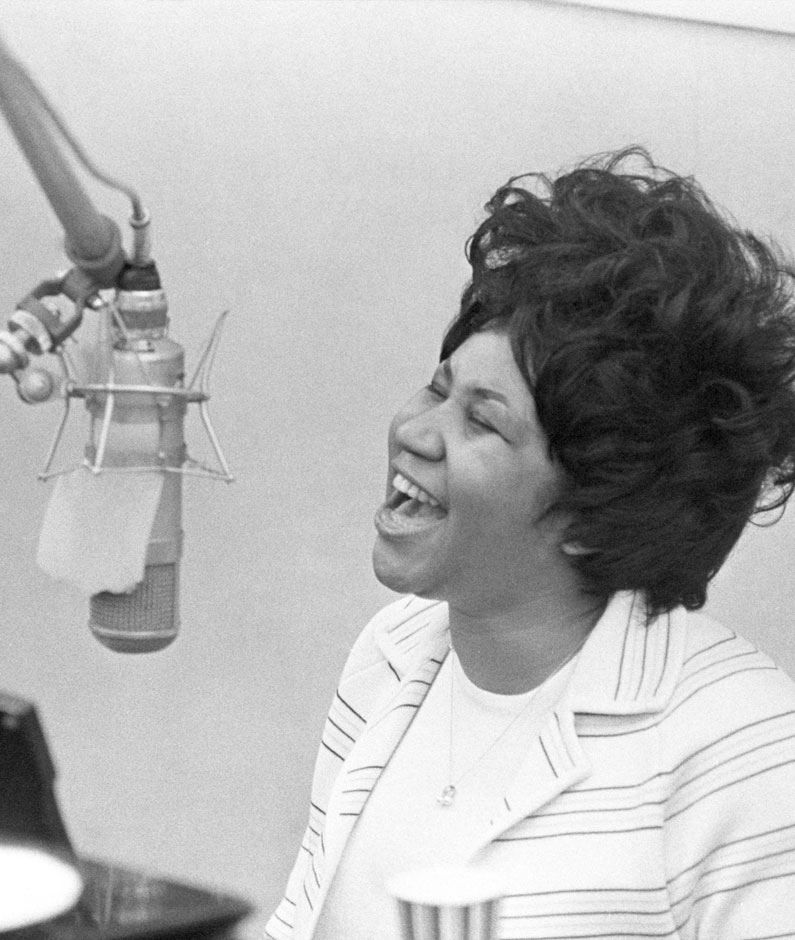 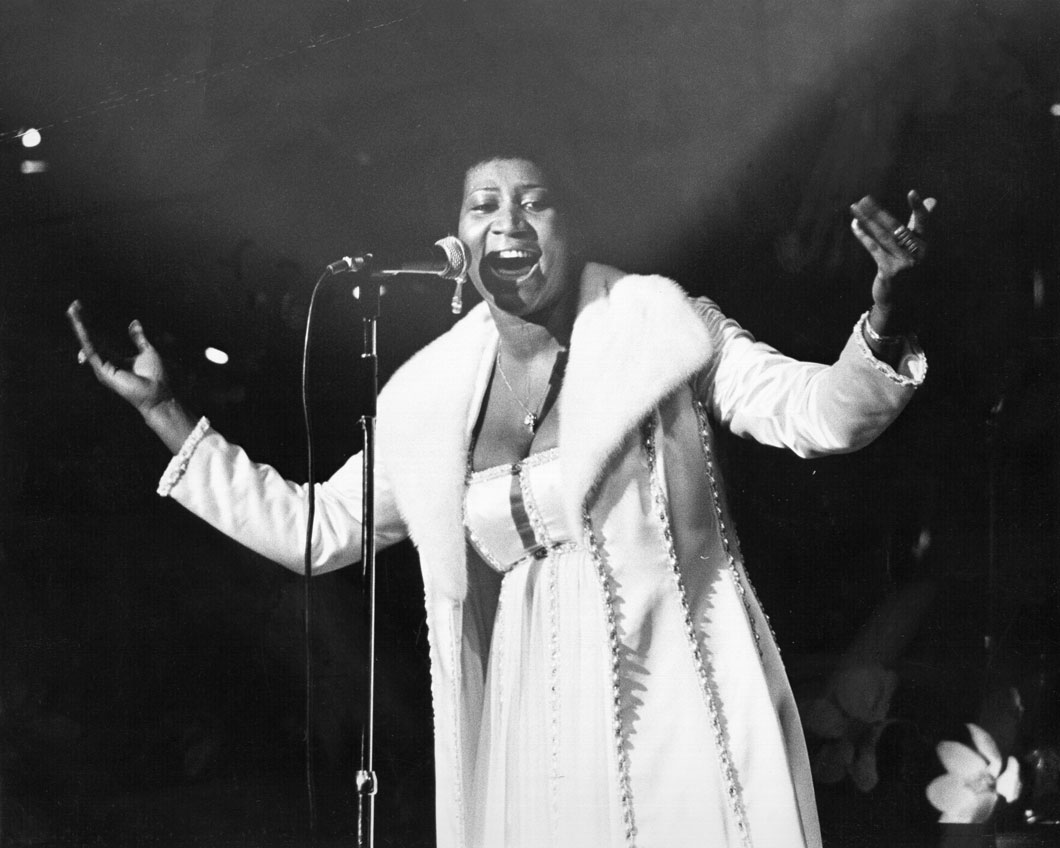 ▲ Everything changed when Franklin signed a contract with Atlantic Records. That was in 1967. There, producer Jerry Wexler suggested she sing what and how she wanted to. As you might guess, she returned to her roots in gospel. . . with amazing results. In that same year, Franklin had her first million-selling single. She also released her version of “Respect.” 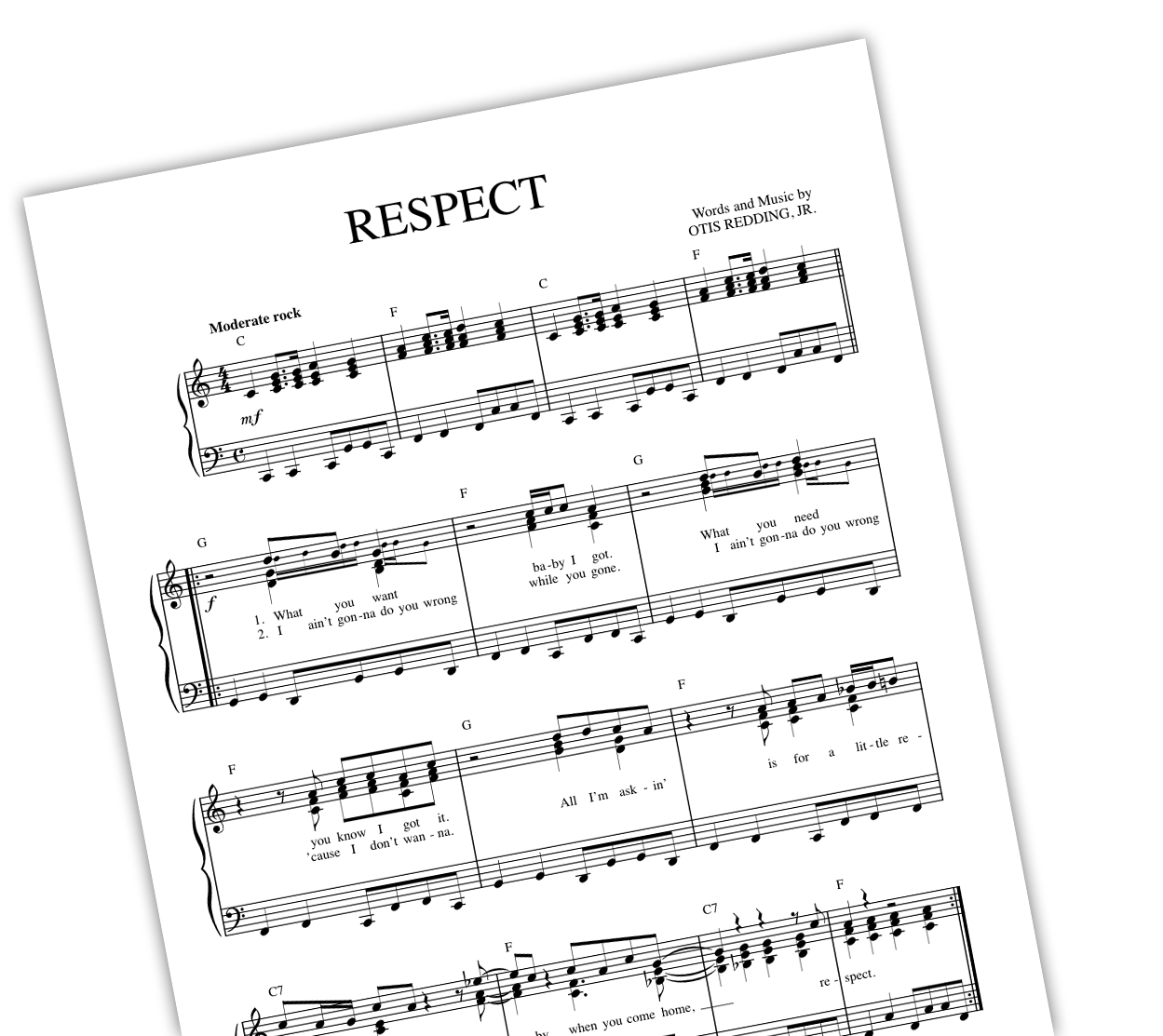 The civil rights movement and the women’s rights movement of the 1960s and 1970s were about demanding equal treatment. Reflect on the lyrics of “Respect.” Why would they be especially meaningful to these social movements? 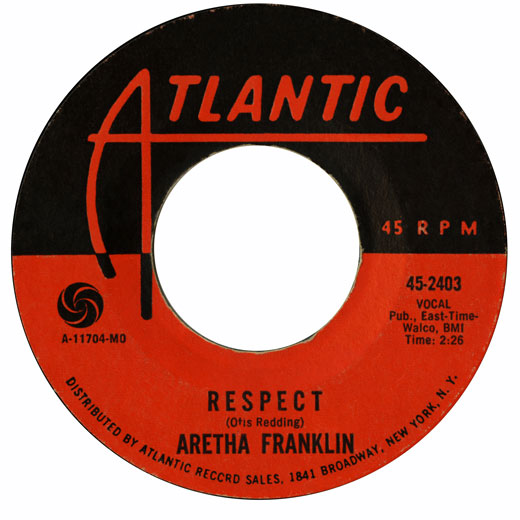 ◀ Franklin’s version of “Respect” immediately became linked to matters of race and gender. The song was still on people’s minds and lips years later. In 2014 Franklin herself spoke about it.

As women . . . we have the power. We are very resourceful. Women absolutely deserve respect. 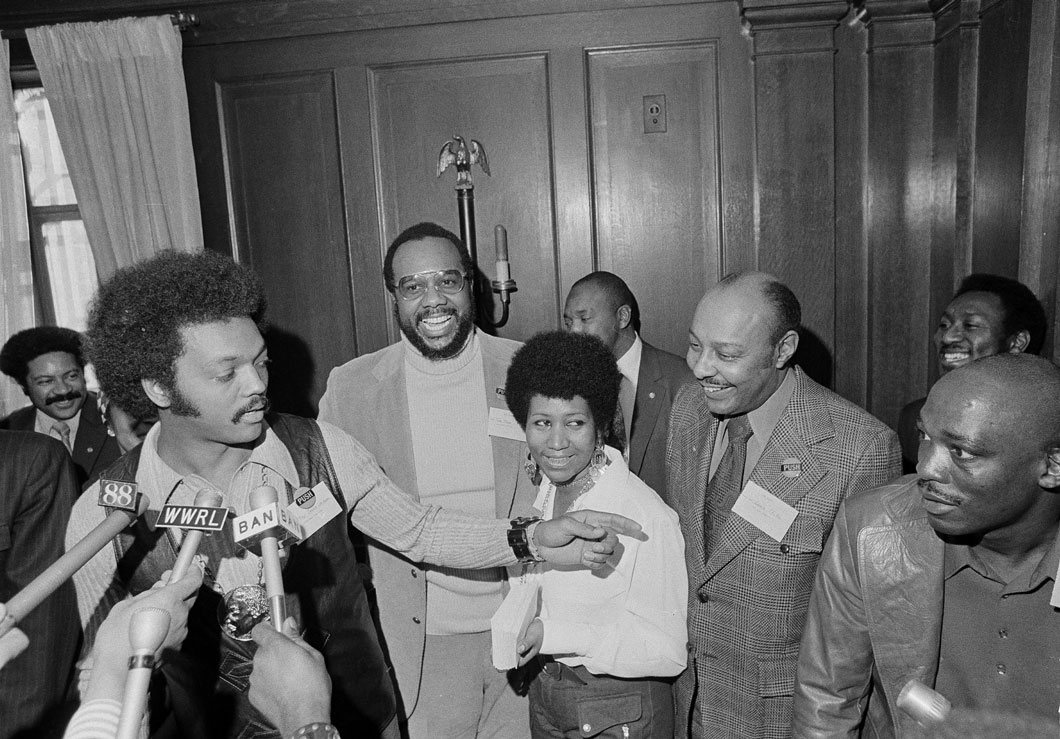 ▲ Aretha Franklin rose to fame during the era of segregation. Her hit song “Respect” was only one of many contributions she made to the social justice and women’s movements of her time. She also toured with Martin Luther King Jr. She gave concerts to help raise money for his civil rights campaign. Bernice King, Martin Luther King Jr.’s daughter, called Franklin a “shining example” of how the arts can be used to support social change. As if to emphasize the point, Franklin had it written into her contracts that she would not perform before a segregated audience. According to the civil rights activist Reverend Jesse Jackson (front row, left, in this photograph), she was a fighter who used her art as a platform.

Next topic in Aretha Franklin

Aretha didn't record her first album until she was an adult.

How many albums did Aretha Franklin sell worldwide?

What US city did Aretha Franklin move to when she was 5 years old?